I’m 1 for 4 when it comes to trading on Fridays. Took a controlled loss on a $FB put (where I’m assuming the price will go down) this morning which was fine. It was reversal time and I would be down much more had I not been disciplined. This touches on a pullback pattern where you buy into a fall to the 13EMA. I really should have entered there but I didn’t have the balls.
Ideal TWTR entry: 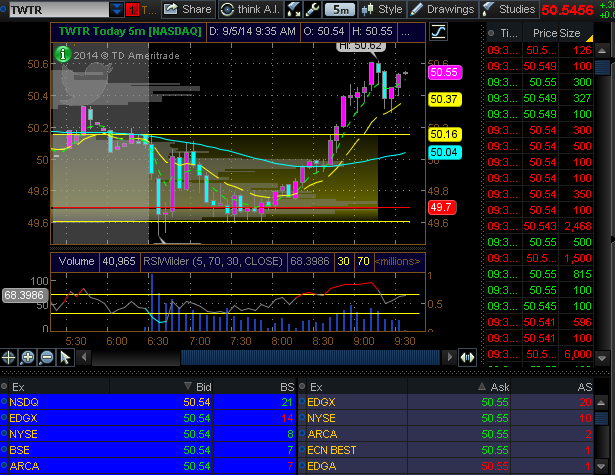 Saw a late day breakout of Twitter’s highs and decided to pull the trigger.
TWTR entry: She then proceeded to roll over and then check out what happened to my brokerage account.
RIP:

Four phone calls later, I suffered a loss 10% larger than it should have been. I can’t say I’m pissed, but I’m not fucking happy about it because it was out my hands.

Lesson to learn from all of this? Facebook and Twitter both put in multiple moves which I should have taken. This is a numbers game. Pull. The. Trigger. Have a good weekend. I’m still positive for the week.

I had some initial doubts today before the market opened about how I would perform today. After having my best day ever yesterday I figured I would find a way to botch my gains today. After a few sips of coffee I decided to push that thought out of my head and play the opening 5 minute range just as I did the previous day. The two stocks in play were the same as yesterday, Facebook and Twitter. Entered at 6:40AM which was a bit worrisome as it pulled back right after my entry. My stop loss was in place so I quickly decided to keep checking who were the morning movers. Entered at 6:35AM at the middle point of that second purple candle. Also a bit tense as it pulled back next candle but held support so everything was good to go.

I got to my risk mitigation points in both which always brings me a slight sigh of relief to lock in some profits.

Things on both the S&P 500 ETF and the E-mini Nasdaq 100 Futures were looking toppy to me. Bunch of long upper wicks which had me put my guard up and prepare to lock in profits. 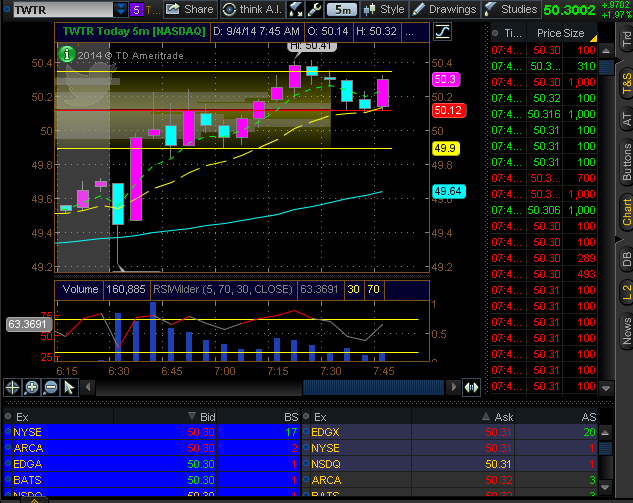 I debated waiting for that teal candle to close (the one that tapped the 13EMA which is the yellow dashed line). $SPY and /NQ were not holding their highs so I took it off for a very small loss. This was unfortunate because while I closed out at 50.15s, she went ahead and made her move to 50.76 after that shake out. You live and you learn. Twitter moves when nobody else is. All of these stocks have their own personality and I have a feeling as time goes on, I will get a feeling how my basket of stocks play under normal conditions. I was shy about 12 cents from my profit target but then she rolled over. I captured a bulk of my entire daily profits and closed out a little bit before my stop loss came into effect. The reason why I can look back in hindsight on Twitter and say, ‘damn, I got shook out oh well,’ is because it was a very small loss and then went higher. Had I held it, yes I would have doubled my profit today… but that’s not following my own rules. Had I broken this rule on Facebook, I would have lost all my gains for the day. $FB traded down into the 76.30s but I closed out in the 76.70s. Sometimes my stop will be to tight, other times it will save me from large potential losses. All part of the game.

See you all tomorrow.

Well the $SPY and /NQ took a dive so I figured it was time to buy some puts. Locked in another 20% on $FB. Should have hopped in $TWTR as well but I’m still new to playing these late day moves. 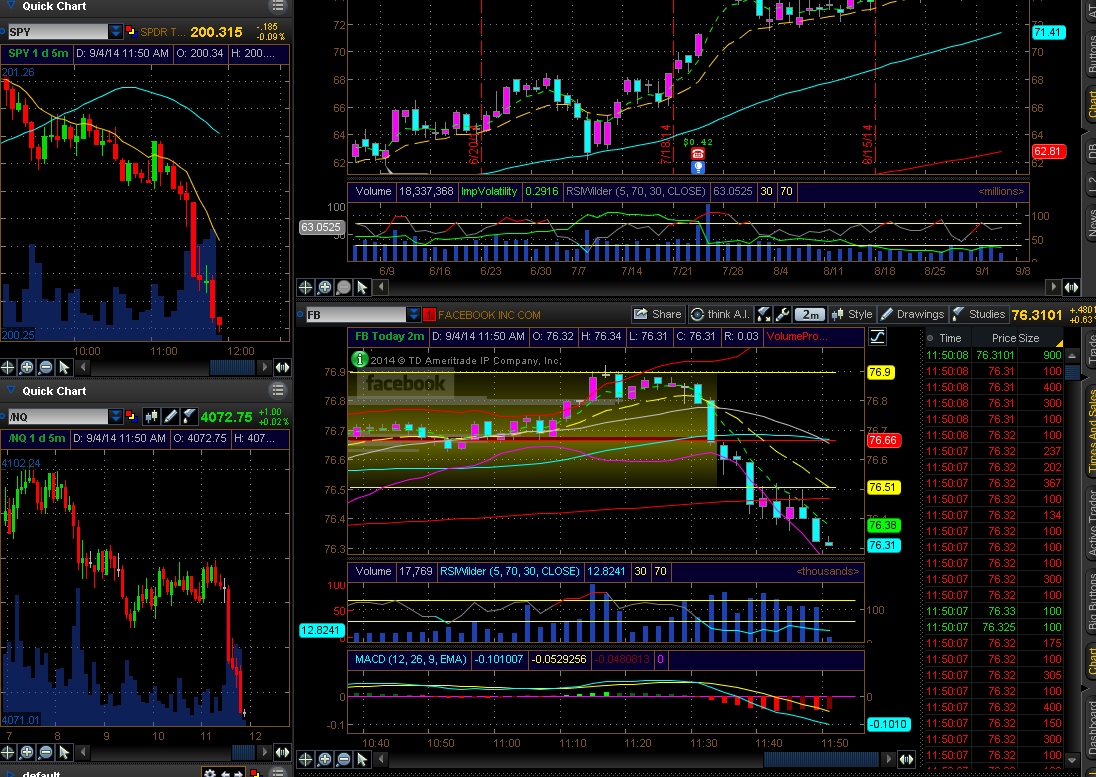 Something I could not force myself to do this summer was play the opening range, even when that is when most of the money is made. I was never confident enough to have a thesis to which way it was going. Considering the size of my small accounts, I have to play directional options on the long side. I don’t have the luxury of selling in stale environments. With my scholarship at Sang Lucci I have had the pleasure of being in a chat room with many established traders. After hearing about how they play/decide which direction a stock is likely to go I formulated my own system that I’m comfortable with and today I pulled the trigger on it. If you couldn’t tell from yesterdays post, pulling the trigger is the most difficult part for me.

The SPY gapped up today but was looking weak. When $FB couldn’t make it back to her high’s, I got into an ITM put. While I normally focus on 1 stock at a time, $TWTR put in a nice flag and when it broke, I also entered an ITM put. 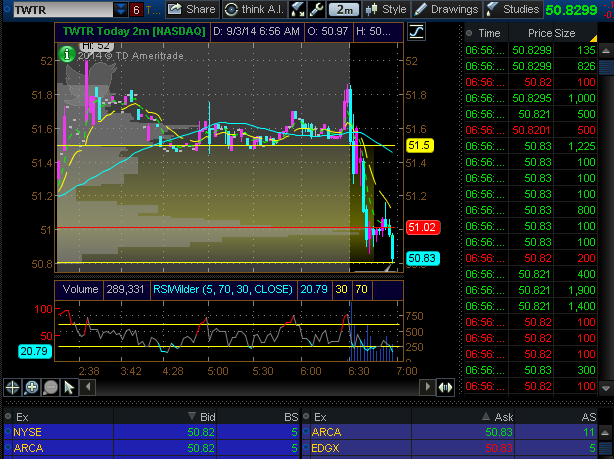 She was finally starting to roll over and I got to my risk mitigation point and locked in some profits on both $FB and $TWTR. Now it was just a waiting game to reach my main target. 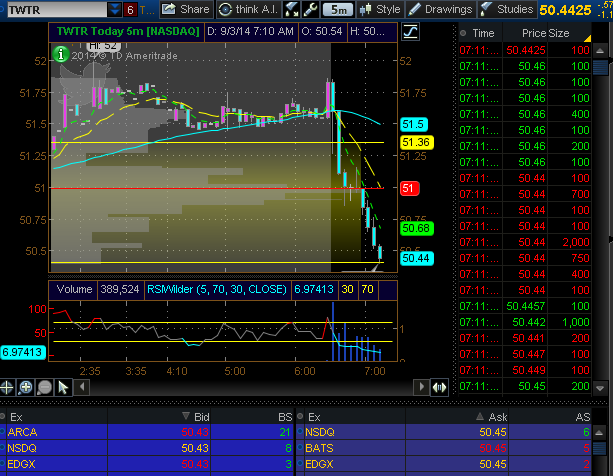 While I tried not to get excited, the trade worked out exactly how I planned. I scaled out half at my profit target and left 25% to ‘run.’ The last 2 screenshots are of when I closed out my runners. While both $FB and $TWTR did retest their lows, my stop loss was the 13EMA on the 2min time frame and I was completely content to lock in my largest winning trade to date. I also have a dentist appointment in the next hour so I was going to wrap up everything and be flat the market for that anyways. I hope you all had a great Labor Day. Let this mark the start of a new direction for Finding Chezz. If you guys missed the previous post, I mention that I will be fully transparent in all the trades I take from here on out. Some of you might get insight from these posts but I think I am actually the one who will benefit the most. This forces me to analyze all the trades I take and figure out if I’m doing something wrong overall or it just was a trade that didn’t work out. Moving right along…

Last night I slept like crap. We went out with some friends for the holiday so we left the dog in the apartment for a few hours. My guess is he slept so long during the day he was unable to sleep. Needless to say, I’m the one who got to wake up at 3AM, 4AM, and 5AM to him fucking around. I’m highly against trading when I don’t sleep well (for fear of stupid mistakes). Not the way I wanted to start Fall.

Facebook was ripping off the open and I saw my first opportunity to enter on a pullback at 6:44AM. The price was in the 75.20’s. I passed on the opportunity (because I’m a wuss). It took the next leg up to 75.50’s about 4 minutes after that. It then put in another flag pattern and gave the signal to buy. I once again passed. Now she’s at 75.75. It consolidated for a while giving me about an hour to prepare to enter. A little after 9AM, she put in her move. 76 even. After I missed that move I said ‘fuck this’ and laid on the couch for a short nap. It is tough for me to remind myself that there are always more opportunities. The part I’m mad about is that I didn’t have the balls to enter on multiple occasions. That 30 minute nap turned into a 3 hour nap so I must have needed it. Guess where she was now? 76 and a HALF. My 74.5 weekly calls that I was ready to enter into at 1.25 and 1.40 were now in the 2.30’s. Lesson learned, take the trade when it presents itself to you. No questions asked. If it meets my entry criteria, pull the fucking trigger. 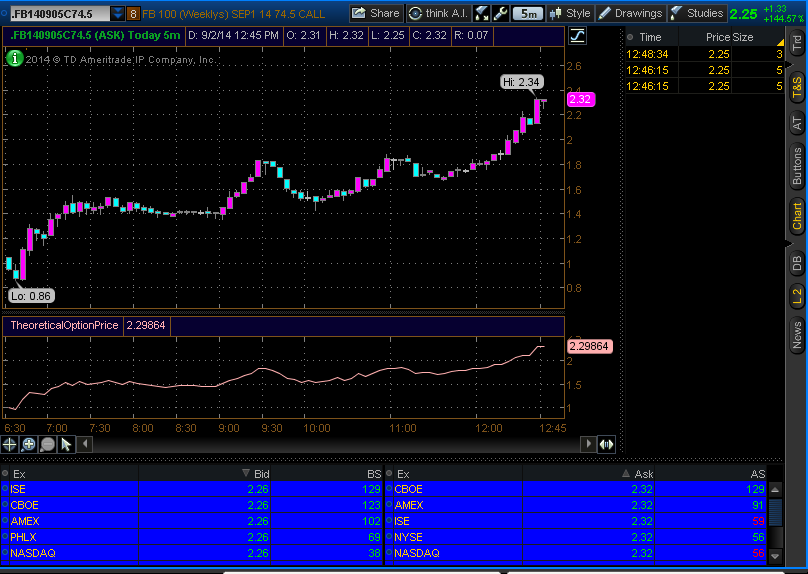